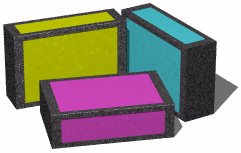 These are not real cigar boxes, but the name comes from their size and shape. The specialist juggling cigar boxes are normally made from wood or plastic. The edges are often protected with tape and the two small end faces covered with felt or a rubbery material. The norm is to use three of these boxes. Two is trivial, and four or more is exceedingly difficult. The basic holding position (from which most tricks start and to which most tricks finish) is with one box held from above in each hand, and the third box trapped between them. Tricks involve manipulating the boxes somehow, and generally finish by trapping one box between the other two.

From the basic starting position, move all three boxes (together) over to the left and slightly up (1). While they are still moving in this direction, pull the right-hand box sharply away from the others (2). As soon as you do this your left hand should start to slow down the leftwards motion of the other two boxes. They should be forced back the other way to meet the first box (which should still be in your right hand) (3). You should finish with the boxes in the same positions as they started. Practice doing this with the other hand as well. You should find that you can get the middle box to ‘stick’ to the end one for up to a second. This is plenty of time to do some tricks…

Do exactly what you did in the previous section, except while the right hand box is free of the others it is turned through 180°. The trick finishes by trapping the boxes as before but the right hand will be holding it’s box from underneath.

There is very little time for the turn, so it must be made quickly. However, it is important not to begin the turn until the right hand box is completely away from the others. If you do, middle box will be disturbed and will not ‘stick’ to the left hand one.

To get back to the original position, you can either repeat the trick, but with the turn in the other direction, or, for a bigger challenge, try the following: Move the boxes (together) to the left and slightly up. Then instead of pulling the right hand box away, just let go with your right hand, and grab the right hand box again from above.

Start as usual with the centre box trapped between the other two. Tilt all three boxes together about a horizontal axis (1). Then give the whole lot a sharp twist back in the opposite direction, moving upwards slightly at the same time. In the middle of this motion, bring the two outer boxes apart releasing their grip on the blue box in the middle (2). Doing this, you should be able to get the middle box to complete a 180° turn, before trapping is once more between the outer two boxes (3).

Variations on this trick involve making the central box do a complete revolution, or even 1½ or 2 full turns. It is also possible to spin the central box about its vertical axis, although getting the right amount of spin and making the final trap are both considerably harder.

Start as for the end turn; by moving all three boxes up and to the left. As you are moving the boxes, let go of the green box with your right hand, and grab the blue box in the middle (1). Take the blue box down, and out beneath the other two, then over to the right. At the same time the red box (in the left hand), should change direction, and head back towards the green box. The right hand should bring the blue box up (2), so the green box can be trapped between the red and the blue.

Lightbox used in gallery, released under CC-BY by Lokesh Dhakar