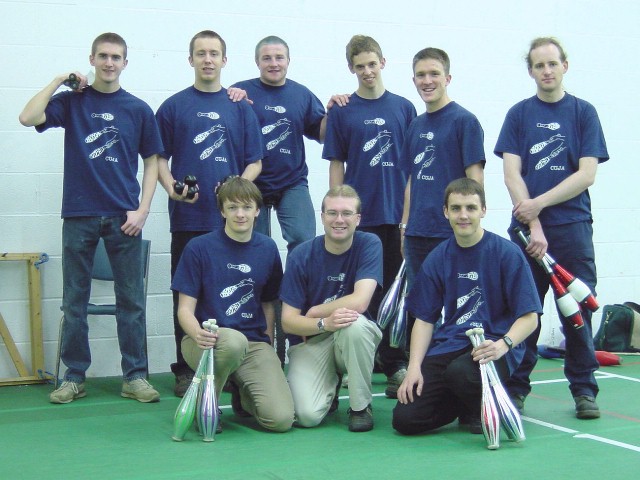 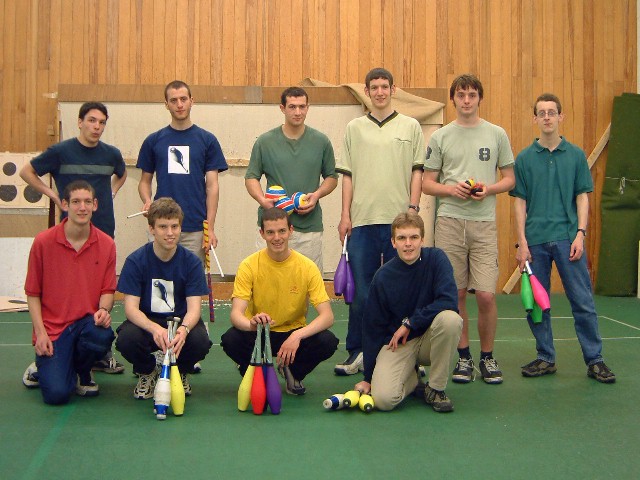 Sunday the 12th of May saw nine intrepid CUJA members make the trip to Oxford on the X5 bus for the annual Juggling Varsity Match. They were so intrepid that they took a coach with no toilet on it. Three long hours later, they arrived in Oxford Gloucester Green bus station, and were met by the Oxford president Simon. Having walked through the city and reached the venue for the match, Sam Gluck and Alastair Pilgrim of Cambridge tried out some perilous balancing exercises involving unicycles. The Oxford team (and most of the Cambridge team) thus suitably terrified, and team photos having been taken, the match began with the jollyball event.

Despite a sterling Cambridge effort, Chris and Ossie contested an all-Oxford final, with Chris proving victorious. The sumo juggling was also underway, Cambridge rectifying their previous efforts with Sam Gluck and Tom Price battling each other in the final, Sam eventually winning.

Throughout the afternoon, the three and five heavy ball endurances were held. The three-ball competition involves juggling three, awkwardly large two-kilo balls, for as long as possible, whereas the five-ball competition uses 850 gram DX powerballs. In both events, Oxford’s Jamie finished as runner-up, but first place in both went to Tom Price and his bionic arms.

Following this, a small number of entrants contested the one-handed devilstick event, which involves the manipulation of a devilstick with a single handstick for as long as possible before any drops. After a marathon contest, Oxford’s Simon defeated Chris Rycroft of Cambridge. The club-on-face balance competition then got underway. Alastair Pilgrim took second place for Cambridge, but team-mate Chris Emerson won by a phenomenal distance, managing to lie down and then get back up again - all whilst maintaining the balanced club. He’d probably still be there now if we hadn’t asked him to stop.

But stop he did, and he then went on to win the five-ball endurance event, with Simon of Oxford finishing second. Chris E., obviously feeling frisky, still wasn’t finished, and took first place in the four-club endurance, with Chris from Oxford taking second place. Following this heady dose of excitement, the three-ball blind juggling event was held, principally so everyone could sit down. With those who dropped then checking the remaining competitors for signs of peeping, David Morgan took the points for Cambridge, Oxford’s Simon finishing as runner-up.

The final indoor competition was the distance club passing, in which two team members attempt to pass six clubs between them over the longest possible distance - all without a drop. Jamie and Nick from Oxford took second place, behind Robert Whittaker and Chris Rycroft of Cambridge. The indoor events thus completed, Cambridge had taken a highly respectable nineteen points from a possible thirty, and were holding a strong position. Could they now perform as well outdoors too?

Cambridge set about confirming their position by dominating in the gladiators competitions, in which both teams attack each other en masse whilst juggling, attempting to force their opponents into a drop. The event finishes when only one team remains, which in both of the ball and the club events was Cambridge.

The thirst for combat satiated, the races were then held over one hundred metres of pristine athletics track. The first race was the unicycle competition. After two heats filled with comic incident, it resulted in Sam Gluck (minus Alastair on his shoulders) destroying the one-wheeled field on behalf of Cambridge. Robert Whittaker took a well-deserved second place.

The three-ball race was a Cambridge one-two, with Nick Smith following Robert Whittaker across the finishing line. Oxford narrowly missed out on the two points when Simon dropped his balls just inches from line. David Morgan achieved an equally fine result for Cambridge in winning the three-club race ahead of Simon from Oxford.

Sam then won his third event, the diabolo high toss, by flinging his diabolo into the clouds higher than anybody else, Chris Rycroft completing the Cambridge domination of this event with an almost-as-high effort. The second diabolo event was the ‘diabolo into the bucket placed on top of the home presidents’ head’, which was won by Oxford’s Nick. Cambridge’s very own Nick Smith fluked runner-up, despite a complete and embarrassing lack of diabolo prowess. This guy rocks!

The events thus concluded, the final score for the Varsity Match 2002 stood at Cambridge 37 points, Oxford 14 points. The traditional finale, the Big Toss Up, was staged, and serious injury was once again miraculously avoided. Both teams then headed for food and the pub, anticipating the next contest in 2003 in Cambridge. Congratulations to everyone who took part for a highly enjoyable day.

Photos are taken by Robert Whittaker and Tom Price, 12th May 2002.

Lightbox used in gallery, released under CC-BY by Lokesh Dhakar